Samples
Need a hand with your app?

“todo-zumo” is a simple one-screen AngularJS Todo app that demonstrates features of a Breeze + AngularJS.

To keep your attention squarely on client development, this app can run without defining a server on your machine. By default it queries and saves data to a Microsoft Azure Mobile Services (AKA “Zumo”) back-end that is waiting for your call.

The Zumo aspect alone may be interesting to you. Alternatively, if you’re developing in a Windows environment, you can reconfigure the app to talk to an ASP.NET Web API back-end running on localhost. That server is included in this project in the todo.WebAPI folder as discussed below.

The Breeze features of particular interest are:

The breeze scripts are not included directly in this sample. You must copy them into the sample before you run it.

Windows users can simply execute the getLibs.cmd command file which copies the files from a source directory in the samples repository into the scripts folder.

Windows may ask you to approve running this script; please do so.

The application should appear in the browser. You may have to wait a minute for Azure to revive the sleeping Mobile Service instance; subsequent browser refreshes will be quite crisp.

When the data are loaded. You can start adding, modifying and deleting TodoItems. It might look like this: 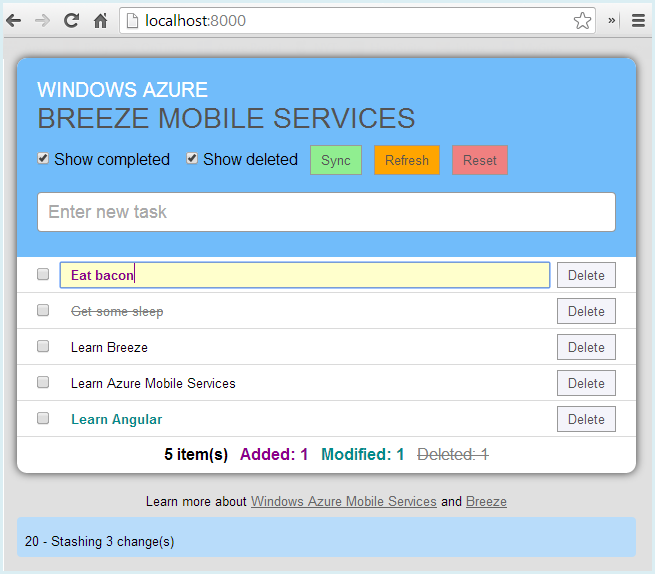 If you’re on a Windows .NET 4.5 machine you can reconfigure the app to talk to a local ASP.NET Web API service.

You’ll have to build ASP.NET Web API server first before re-targeting the application to that server. Here’s how:

Run with a Web API server

You can run this server in Visual Studio, either with or without debug. But you don’t have to. Once built, you can close Visual Studio and you needn’t open it again. Instead, do as follows:

Now we’ll reconfigure the application to target the Web API 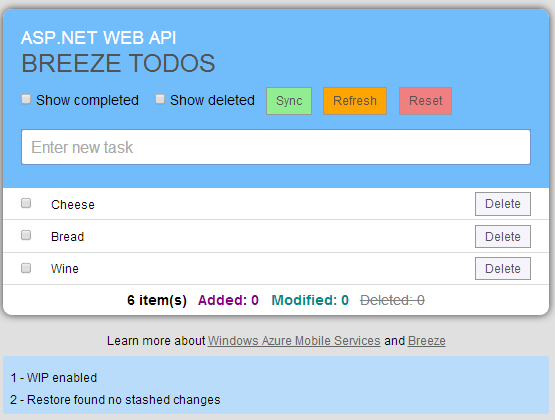 Unlike the Azure version, the Web API version expects the server to generate the Breeze metadata (from the Entity Framework model). If you inspect the network traffic, you’ll see that the app made a metadata request: http://localhost:58066/breeze/todos/Metadata.

You can configure the app to use metadata defined on the client instead.

Now the application uses metadata defined on the client in model.js

Note that Azure Mobile Services cannot generate metadata and so that version of the application must always use the client-defined metadata.

The TodoItem entity only has three properties so it’s pretty easy to write and read the metadata by hand: