Cool Breezes
Need a hand with your app?

It is surprisingly difficult to write an intuitive UI with which a user can maintain many-to-many associations. This “Cool Breeze” describes one way to do it … with a live code example (see below) 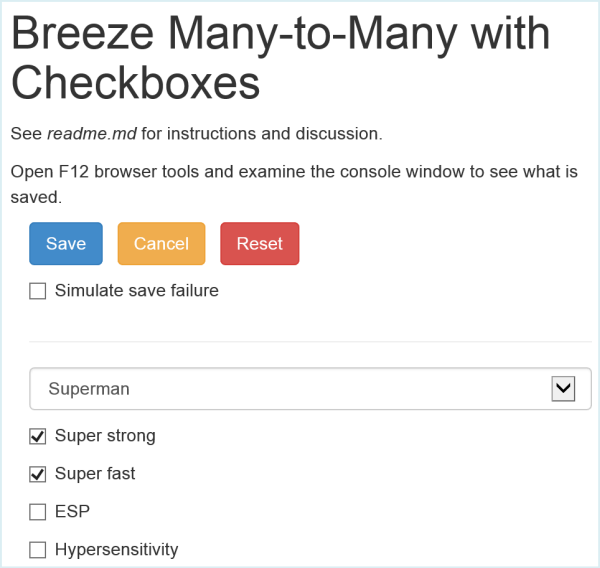 Breeze does not (yet) directly support a many-to-many association between two EntityTypes. Breeze requires an explicit “map entity” to join the two. The “map entity” holds a one-to-many relationship to each entity and can also hold an (optional) payload with properties such as isActive or mappingCreateDate.

The implementation of the mapping, whether implicitly or through a “map entity”, is besides the point we’re making here. The essential quandry is how to present all the available mappings so the user can pick which ones to keep and which to discard.

We can’t simply present the existing mapping entities (the HeroPowerMap entities) with checkboxes in front of them because these entities only represent the powers that the hero already has. We need a check list of all available powers, not just the hero’s current powers.

In the live code example, an AngularJS UI presents one entity (the “hero”) and all possible related mappings to the other type (the “super powers” that a “hero” can have) as a collection of checkboxes. The user adds and removes “super power” mappings by checking the checkboxes.

Rather than repeat the details, we refer you to the readme.md on plunker.